The Charm of Blackpool

When you mention Blackpool it is often met with contrasting reactions, raised eyebrows, knowing smiles and either excitement or disappointment. Having took a trip here to see the 2019 annual illuminations it was a pleasant surprise. Not too many years ago the image of Blackpool was one of drunken hen and stag do’s, rowdiness and cheap drink. While this may still be present it was not obvious from our recent trip. 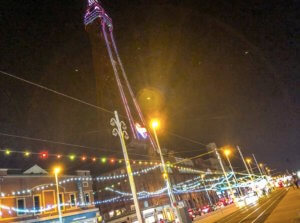 Blackpool tower lit up for the annual illuminations.

Just over one hour from Manchester we headed for a small town to the north of Blackpool called Cleveleys. The plan being to miss the traffic jams and hassle of parking and use the seafront tramway to travel down to the “lights”. Now Cleveleys is not much to write home about I’m afraid but It does have a good number of Fish and Chips takeaways and restaurants. All of which seem to have won awards and all serving fish which has been landed up the road in Fleetwood. We opted for Steve’s Chippy, we took our seats in the typical canteen style restaurant, ordered and eagerly awaited our food. Out first came the tea (you have to have a cup of tea with fish and chips), it was a pot of tea for one served in one of those little metal tea pots, the one that dribbles everywhere. Now, much as these little tea pots aren’t much to look at one thing you are always certain of is a good brew and this wasn’t to disappoint. A few minutes later our food arrived, fish, chips, mushy peas and curry sauce (we were hungry). It was just right, and the fish under the crispy batter was white and flakey and cooked to perfection.

Once eaten we headed off to find the tram station which as it turned out was only a five minute walk from the chippy. Blackpool trams also have a great app which you can download and buy your tickets on. We purchased a family ticket which allowed us unlimited 24 hour travel on either the trams or the busses and was a reasonable £12.50. Hopping on the modern tram we found ourselves sat amongst excitable kids and adults with the thrill of the illuminations forthcoming.

Soon we arrived in Little Bispham, the start of the illuminations. Now I remember many years ago, when I used to get taken there as a small excitable child, there were these illuminated panels which have mechanical moving characters, well they are still there. The lights look a little dimmer now as we have gotten used to LEDs but this all adds to the charm. The small children on the tram where mesmerised with them which in this world of mobile phones and apps was a stark contrast to what we have become use too. The old stuff still creates magic. (Maybe thats why we still get lots of interest in our 40 year old camper vans.) 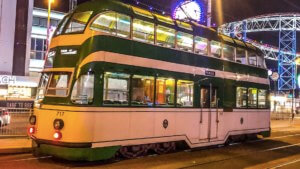 One of the old Blackpool Trams in use during the annual illuminations.

Jumping off the tram down at the south end of the town just across from the Pleasure Beach we started our stroll along the sea front back north. The promenade has been updated and is made up of wide winding paths flanked with the beach on one side and the town on the other. The atmosphere is calm and quiet, lots of people around walking and enjoying the lights, eating chips and drinking coffee as they go. Some stood taking pictures and selfies and pointing at the various landmarks. As we strolled along we soon noticed the old style Blackpool trams trundling by, some illuminated (still as they were when I was young). These trams were one of the main things which used to characterise Blackpool many years ago along with the tower itself, the donkeys and men sat with knotted handkerchieves on their heads moaning about how hot it was.

After about an hour we arrive back at the north end of town near the tower. We can’t resist but to stop and buy some doughnuts and coffee, an absolute must when walking the lights by the way. After which, well we couldn’t resist a go on the Kentucky Derby in one of the many amusement arcades. Simple things sometimes can give the most pleasure and this evening was just that. Fish and chips, a tram ride, a stroll, doughnuts and the amusement arcade. Does Blackpool still have its charm? You bet.

If you are planning a trip here and hiring one of our camper vans or motorhomes there are plenty campsites close by. There are now also options for overnight parking on some of the car parks in and around the town.