At the end of April we received a call from a production company interested in hiring Bessie for a day of filming in Manchester. This isn’t something unusual for us as our vans have been involved in a variety of film & TV productions. We were told they would only need Bessie for a couple of hours so we agreed to drive Bessie the short 20 minutes journey to the film shoot location. 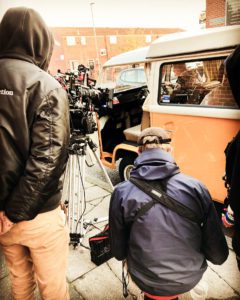 We parked Bessie down a side street in Moston expecting to hang around for a couple of hours whilst they did their film shoots in and around Bessie. However, we soon found ourselves quite heavily involved in the filming.

The video for the track which covers The Stone Roses “Fool Gold” hit from 1989 and is introduced by Shaun Ryder. Apparently Shaun Ryder’s fee for the introduction to the video was four cans of Guinness.